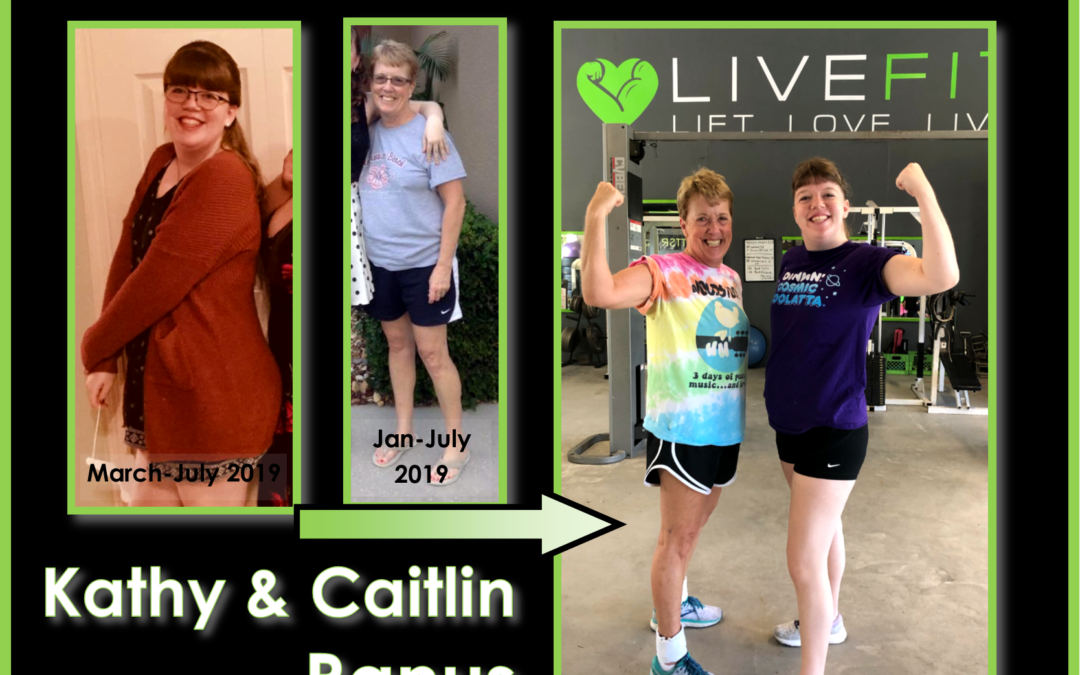 I started coming to LiveFit back in January.

Before that I hadn’t been exercising for about 2 years. I was still watching what I ate but my clothes were beginning to feel a little snug and I also wasn’t feeling that great mentally.

What motivated me was seeing the results of Tina Jones who was my coworker. I had started to ask her questions about LiveFit and little by little I got myself through the door.

I haven’t looked back since.

I was just so happy to be doing something for myself that I didn’t have any fears.

I felt welcomed that first day and was amazed that the trainers remembered my name the next time I came.

I like that every day is different and the trainers are always there for you and they push you.

My first personal victory was seeing the inches starting to come off.

My future goal is to just keep showing up. I was able to convince my daughter Caitlin to join which makes me so happy.

I knew that she just needed to walk through the doors and she would love it just as much as I do.

It probably helped that I asked her to come with me every time I went to the gym.

She told me recently that she noticed a change not only in my physical appearance but that I was a lot happier since joining the gym.

Hearing that makes my heart happy.

I want to be around for a long time.

My fitness journey all started the summer before my senior year in high school when my mom and I signed up with Family Fitness.

We were both doing pretty well at the gym. We were doing kick boxing and Zumba along with making better food choices.

I then had gotten a job at Dunkin’ Donuts and my diet took a major nose dive and then the gym got boring to me, so I stopped going.

So here I was, 18, not doing anything active and eating like absolute crap, just flat out being lazy.

Suddenly, it was like the heavens opened up, because there was an Anytime Fitness opening up down the street from my house.

So here I went again, trying to get back into a routine and signed up to Anytime, where I instead didn’t go for a whole year while I was still paying for it.

It wasn’t until January of last year when my mom enrolled in LiveFit and it was like she did a complete 360.

She was losing weight and was a lot happier too, and every day when she would leave for the gym, she would ask me if I wanted to go, but every time I would tell her no.

She would then continue to lecture me on why I would love it, but at the time I wasn’t having any of it. Then one day, she made me come with her to the gym, and from then on, my life changed for good.

I enjoyed that day so much, and my favorite thing from that day was Micki’s finishers on Saturday.

The first few weeks were rough because I expected so much of myself at the time since I was one of the youngest members. It took me a long while to come to terms with the fact that I needed to stop pushing myself so much.

My real a-ha moment came during the Game of Shreds challenge when we had the final celebration night and Derek was giving out the awards and highlighting members who had lost enough weight to be noticed and recognized.

It had never crossed my mind that I was one of those people until he said my name, and that’s when it had hit me that I truly didn’t realize how much progress I had made up until that point.

I wouldn’t have been able to do this without the trainers constantly pushing me to my limits and believing in me when I wasn’t believing in myself.

Most importantly, to my mom, who is my number one motivator and the number one person in my life who doesn’t allow me to quit, and who doesn’t fall for any of my crap.

So thank you all for helping me become the best version of myself.