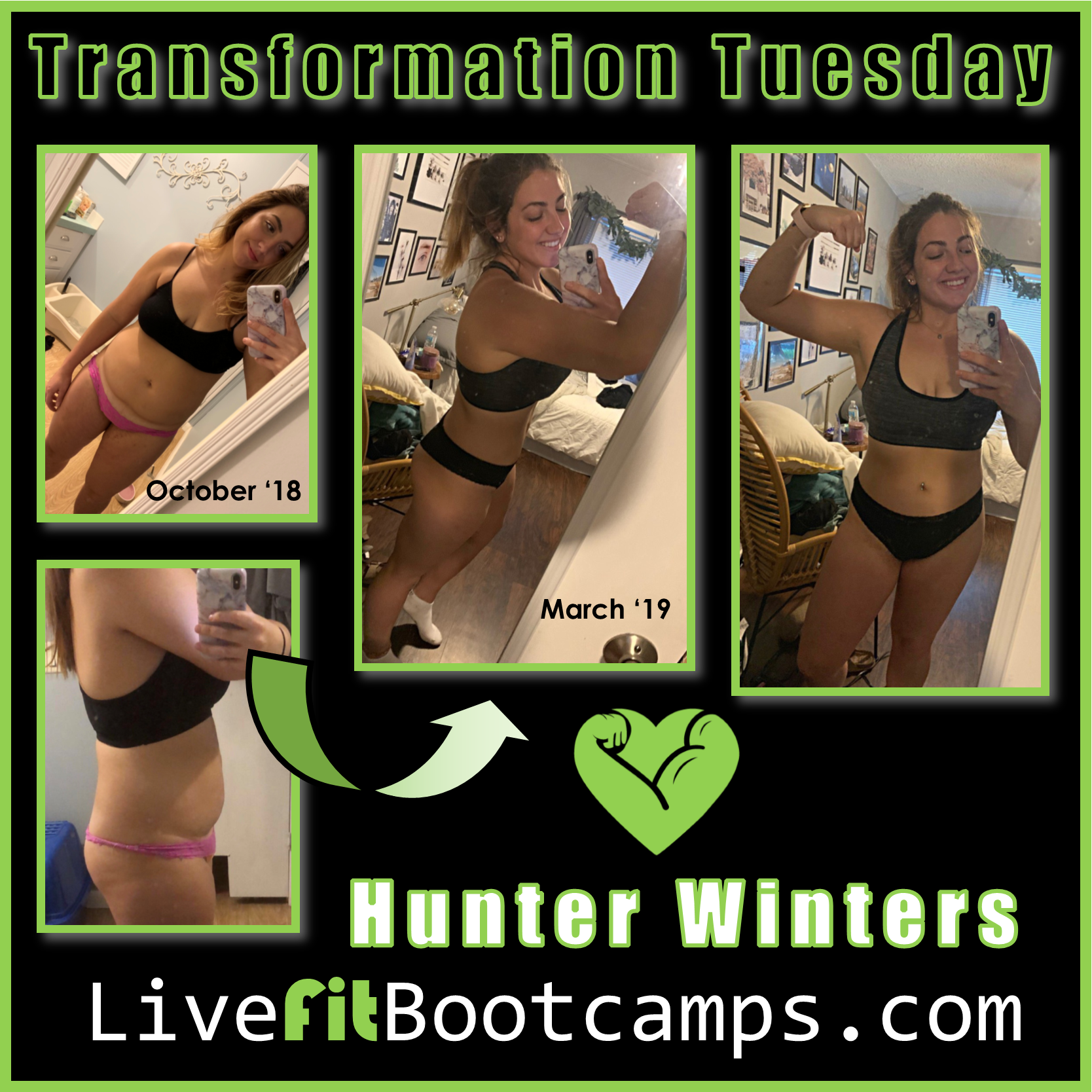 I started coming to bootcamp back in October when one of my friends, Skyler, who had been attending LiveFit for 10 months at the time, recommended it to me.

I saw her transformation pictures online and reached out to her because I had been struggling to lose weight, and she looked so amazing!

At first, I was a little skeptical. I used to think all the boot camps and fitness groups were a waste of money and time.

“Why am I going to pay a bunch of money to go do a work out that a trainer who has no interest in knowing me personally came up with and I’m going to see no results, etc.”

…but I was very, very wrong!

I was always pretty athletic. I played a lot of sports my whole life growing up so I wasn’t new to working out, but it had been some time since I was dedicated to being healthy, both mentally and physically.

Confidence has always been something I’ve struggled with.

I always felt that I could never and would never be beautiful, because I wasn’t a size 2.

I’d over-edit my photos and try to use apps to make myself look skinny because I thought that’s what beautiful was.

I had a hard time taking and finding before pictures because almost all of them don’t have my face in them, because I was embarrassed of my body and who I was.

Growing up my Grandmother always knocked me down.

I also experienced an emotionally abusive relationship where a man told me that I was worthless, fat, and unattractive and that nobody would ever love me.

I believed him, and her.

-Hunter’s experiences that have impacted her confidence

That was my mentality for the longest time.

Friends and family never wanted to hurt my feelings, so they’d always tell me I looked great, that I was just “big-boned”. Two words that even today bother me.

I suffered from anxiety and depression, like most other people, and found myself either binge eating or not eating at all.

I felt stuck in a body and a mindset that never mirrored who I actually was.

Until I started attending LiveFit!

After my first couple workouts, I was so sore! I was like, “wow, maybe this is actually doing something for me?”

I also thought, “wow, all of these people are older (some a lot older- Derek’s edit) than I am, and they are in WAY better shape than I am.”

When I showed up everyone was so kind and friendly. All the trainers made it a point to introduce themselves and get to know me.

They cared more about my fitness journey than I did when I first started!

They’d send me accountability text messages, educate me on my diet and they’d expect to see me there, which made me more inclined to go.

How many excuses could I come up with that weren’t, “hey sorry I’m just lazy.”

And it wasn’t just the trainers. Other clients have always encouraged me and rooted for me when I struggled. They were real team players, they made it fun and helped me challenge myself when in my head all I wanted to do was quit because “it hurt”.

It wasn’t until I got measured after my first challenge that I really started to get motivated. I lost weight and inches. The scale was actually going down instead of up.

I thought to myself, “OMG Hunter, you might be able to actually do this. You won’t just be looking at other people’s transformations online and envying them, you can have your own!”

I could feel myself starting to blossom. The person who I was on the inside, the girl who felt like she was trapped, was starting to show on the surface.

Confidence started becoming a part of who I am and it’s because of LiveFit.

As I pushed myself to make it through the last 10 seconds of a round despite how tired I was, I was also training my mind to be stronger. I was able to fight off bad thoughts geared towards failure.

“I can”, started becoming more prominent than “I can’t”, and it’s little things like this that have literally changed my life and changed who I am as a person.

Going to a workout doesn’t feel like a chore to me, it’s a way for me to de-stress and have fun!

My whole day feels thrown off if I miss a workout now, when before I had to literally force myself to go. I make time, when before I felt like I never had any time to go.

Don’t get me wrong I still struggle, but that’s part of the process.

I still have more weight I want to lose, but I know in time it will come. My goals now are to just keep becoming stronger and to keep pushing myself to be better.

I’m 24, but I finally feel like I’m actually living as my truest self and it’s all thanks to every wonderful person at LiveFit!

I will be forever grateful for the friends, fitness family and confidence I have gained from one simple, “what the hell, I’ll give it a try!”.